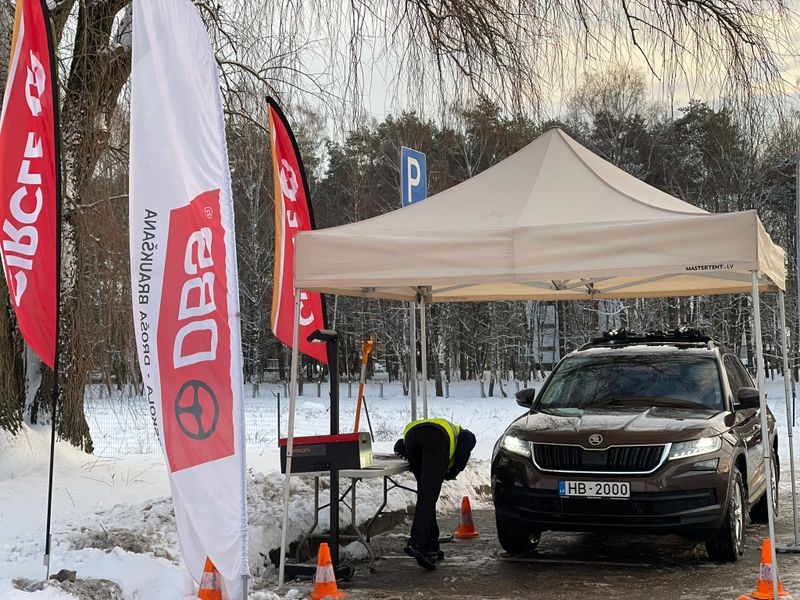 By inspecting 300 vehicles during car tests, Circle K and the School of Safe Driving found that drivers did not pay proper attention to the technical condition of their headlights before preparing the car for winter.

More than 80% of the participants in the campaign had insufficient light intensity to detect pedestrians and other road users on the road in time.

'In view of what has been seen during the tests and the fact that the roadworthiness test does not involve measuring the brightness of the headlights, every driver must remember that in the winter season it is important not only to change the tires to winter tires, but also to check the headlights. In most cases, the headlight bulbs were not bright enough and in some cases the lights had to be adjusted correctly, ”says Jānis Vanks, Director of the Safe Driving School.

The rapid onset of winter forced drivers to prepare their cars in time. "For most of the surveyed cars or 60% of the campaign participants, the tread balance of winter tires was 6-7 mm, which is still appropriate for this season, but next time - winter tires will have to be changed," says Jānis Vanks. "The oldest tires of the cars tested were from 2006 with a tread residue of 3.5 mm, which must be replaced in such cold and snow conditions."

During the campaign, there were only a few cases when car owners had not yet taken care of window fluids intended for winter use. The window wipers were also of adequate quality for most of the participants and the drivers admitted that the wipers are changed regularly - at least once a year, most often in the spring.

The oldest car tested this year was the 1992 Audi 80. The tires for the almost 30-year-old vehicle were in working order, with the residual tread allowed by law, ”says Jānis Vanks.

Gatis Titovs, head of the fuel category at Circle K Latvia, reminds that in the winter season, especially now that a large island is forecast, not only the technical condition of the car must be taken care of, but high-quality fuel that protects the car engine and optimizes its performance. 'To prevent corrosion of the water in the fuel system, freezing in winter and stopping the engine, the fuel in the tank must be more than half. In addition, additives that improve fuel quality, such as cetane improvers, will make starting the engine easier in cold weather, ”explains Gatis Titovs.

Taking care of traffic safety, the Safe Driving School (DBS Driving School) in cooperation with Circle K petrol stations offers free car inspections every year so that drivers can make sure that the cars are ready for winter roads.

The compliance of winter tires with the law and the basic principles of safe driving is determined - they are in working order if they are not older than five years, as well as the tread of the tires in the shallowest place is not less than 4 to 5 millimeters;
Inspected car headlights to ensure they are properly adjusted and do not dazzle oncoming traffic;
The quality of the window wipers has been checked so that they can be replaced if necessary;
Advice is provided on safe driving in the winter season and preparations for the car to be ready for the winter.

DBS Driving School is the first school in Latvia that not only trains cadets to obtain categories B, BE and A, but also professionally teaches drivers the basic principles of safe driving. DBS students learn not to get into traffic accidents, protect themselves and others from injuries, avoid material damage and feel safer on the road. In addition to safety aspects, driving culture as well as fuel and car maintenance economy are mastered. Drivers acquire knowledge and skills that are not yet possible to acquire so comprehensively in other driving schools in Latvia.

Circle K Latvia is the leading convenience shopping and fuel retailer in Latvia, offering the highest quality products and excellent service. Circle K is the largest gas station network in Latvia - 86 outlets, of which 81 are full-service gas stations (including 14 franchises), 4 automatic filling stations and a convenient shopping store in Old Riga. As one of the world's best-known brands of fuel and convenience stores, Circle K is represented in more than 20 countries.